BURLINGTON, ON, Aug. 6, 2015 /CNW/ – EcoSynthetix Inc. (TSX: ECO) (“EcoSynthetix” or the “Company”), a renewable chemicals company that produces a portfolio of commercially proven bio-based products, today announced its financial and operational results for the three and six months ended June 30, 2015. Financial references are in U.S. dollars unless otherwise indicated.

“In the second quarter, we began to see clear progress from the strategic growth plan we announced in early 2015,” stated Jeff MacDonald, CEO of EcoSynthetix. “Despite continued pricing pressure in the paper market in the first part of the year, we have been able to achieve resource efficiencies, increased volumes and reduced production costs while providing our customers with continued positive returns. In addition to our progress in paper, we have further advanced the trial activity of several industrial-stage wood composite accounts and have expanded our overall pipeline. As we look towards the remainder of 2015, we remain confident that we can commercialize our DuraBind solution in the near-term and expand our presence in paper.”

EcoSynthetix’s continued focus on product innovation, market diversification and disciplined organizational growth has created a strong foundation for the Company to return to its growth trajectory in 2015.

EcoSynthetix has allocated development resources to select projects, in a targeted and disciplined manner, in order to expand its bio-based product portfolio. The Company is focused on opportunities that demonstrate both technical feasibility and strong commercial value in the short and long-term.

In addition to its existing bio-solutions for the paper coating and wood composites space, EcoSphere and DuraBind, respectively, EcoSynthetix is developing a defined number of additional products using its proprietary chemistries and manufacturing processes.

The Company continues to invest in a small number of longer-term development opportunities, including those in conjunction with its university partners.

EcoSynthetix is focused on expanding its presence in paper while also commercializing its offerings in new markets, including building products.

EcoSynthetix has identified applications for its bio-based solutions across targeted segments of the paper value chain where it can offer a strong value proposition. The Company believes that it can meaningfully expand its foothold in this industry. As such, it has signed a marketing agreement with a leading Asian specialty chemicals supplier, Amazon Papyrus, to market, sell and distribute EcoSphere biolatex in China. The relationship will allow the Company to tap into an important and growing market in the pulp and paper industry by getting the EcoSphere product in front of key decision makers in the near-term. The Company anticipates that building a strong presence in China will be beneficial as it looks to introduce other bio-based solutions across the paper value chain over the longer-term.

The Company continues to run advanced-stage, industrial-scale trials of its DuraBind solution with multiple wood composite accounts. EcoSynthetix expects that its customers in advanced trials, which have already pressed, cut and laminated boards using the DuraBind solution, will move to multiple shift testing in the second half of 2015. This continued commitment by wood composite mills is a strong indication that the Company remains on track for commercial success in the near-term.

EcoSynthetix right-sized its organization in early 2015 by redeploying resources to high-priority projects with meaningful revenue potential. Today, 75% of the Company’s human and financial resources are allocated towards commercializing the DuraBind solution in the wood composites space.

Going forward, prudent resource allocation will be closely tied to the Company’s innovation engine and sales cycle; this approach will ensure that EcoSynthetix remains product and bottom-line driven.

During the first quarter of fiscal 2015, the Company recognized $1.2 million in termination benefits as a result of a workforce reduction of approximately 20% and the employment termination of the former CEO effective May 1, 2015. As a result of this termination of employment, the former CEO is entitled to an aggregate of $0.9 million, representing a 24 month severance period, inclusive of all salary, perquisites, allowances, statutory entitlements and bonus accounts. Accordingly, the Company recorded a $0.9 million provision for termination benefits during the first quarter of the current year. The former CEO is also entitled to a maximum of 24 months of severance related to the value of long-term incentives during this period. The Company has determined that no additional amounts are owed with respect to these long-term incentives as the associated performance conditions have not been met. Accordingly, the Company ascribes no value to the long-term incentives for the 24 month severance period. If the value of the long-term incentives is disputed, the Company’s potential exposure is estimated to range from nil to $0.7 million.

For the three months ended June 30, 2015, foreign exchange gains were $0.1 million compared to a gain of $0.05 million during the same period last year. The increase in foreign exchange gains was primarily due to translation gains resulting from the revaluation of cash balances denominated in Canadian dollars at June 30, 2015 and a strengthening of the Canadian dollar versus the U.S. dollar during the current quarter compared to the same period last year.

For the six months ended June 30, 2015, foreign exchange losses were $0.5 million compared to a gain of $0.03 million during the same period last year. The increase in foreign exchange losses was primarily due to translation losses resulting from the revaluation of cash balances denominated in Canadian dollars at June 30, 2015 and a weakening of the Canadian dollar versus the U.S. dollar in the current fiscal year.

EcoSynthetix will host a conference call on Friday, August 7, 2015, at 8:30 AM ET to discuss its financial results. Jeff MacDonald, CEO, and Robert Haire, CFO, will co-chair the call. All interested parties can join the call by dialling (647) 427-7450 or (888) 231-8191. Please dial in 15 minutes prior to the call to secure a line. A live audio webcast of the conference call will also be available at www.ecosynthetix.com. The presentation will be accompanied by slides, which will be available via the webcast link and the Company’s website. Please connect at least 15 minutes prior to the conference call to ensure adequate time for any software download that may be required to join the webcast.

EcoSynthetix offers a range of engineered biopolymers that replace the non-renewable chemicals used to manufacture many products, such as paper and packaging, personal care products, insulation and wood composites. Our flagship products, EcoSphere® biolatex® and DuraBindTM biopolymers, provide a sustainable alternative that reduces a customer’s carbon footprint, decreases overall material costs and improves performance. The company is publicly traded on the Toronto Stock Exchange (T:ECO). 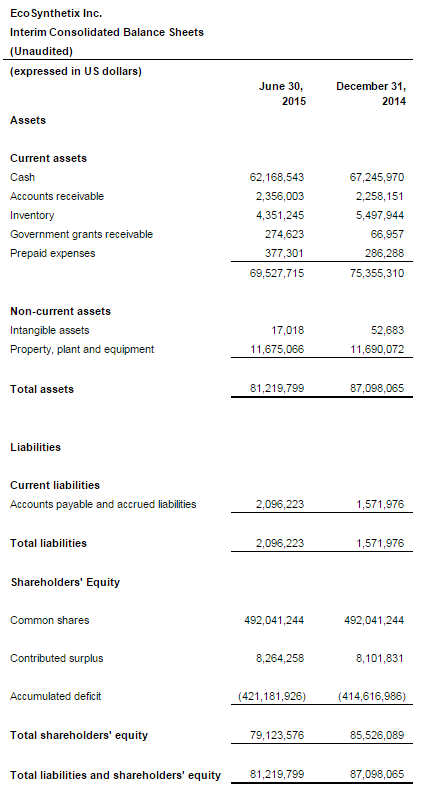 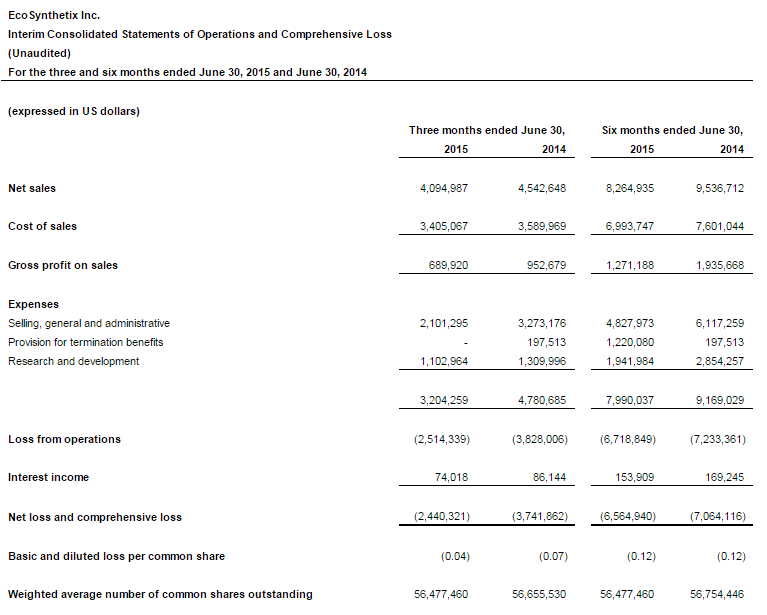 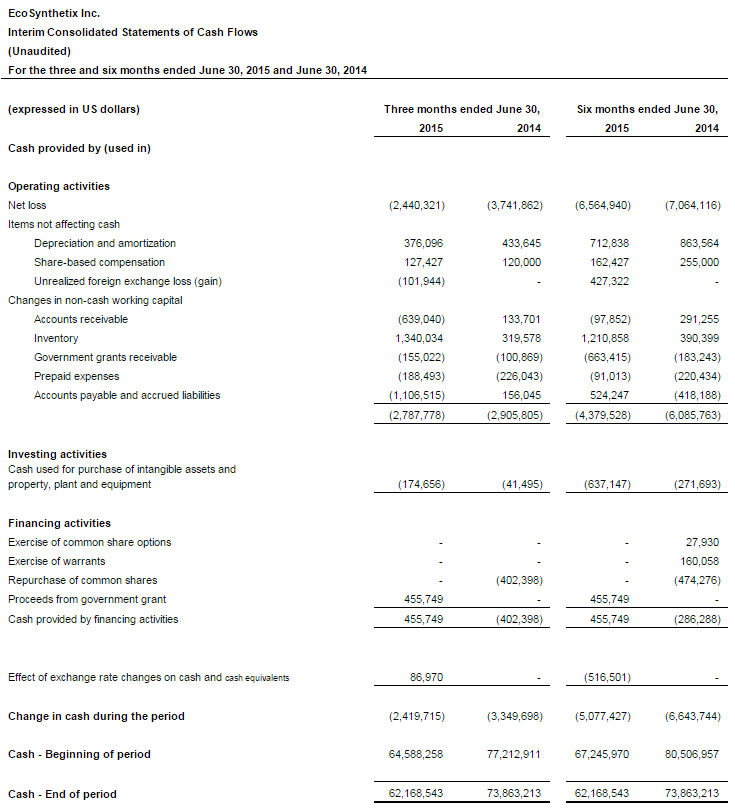